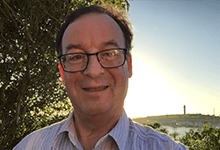 The first records of the texts of this great acclamation occur in apostolic times (Mt 21:9, c.f. Ps 118:26; Rev 5:8-9, c.f. Is 6:3; and Clement's first letter to the Corinthians 34:5-7). The use of the Sanctus in the Mass is first attested in the fourth century (Anaphora of Serapion, and Apostolic Constitutions). The use of the complete text in its current form is first attested in the sixth century in the Gallican Rite by Caesarius of Arles.

The oldest surviving Sanctus chant is that found in the Gregorian chant of the Ordinary of the Mass number XV, dated to the tenth century. It bears the marks of congregational singing, with repeated melodic phrases and no extended melismas.

Today, the Sanctus is the primary acclamation of the assembly in the Liturgy of the Eucharist. By its very nature It is a song, and should be sung by all while standing. It is a sign of the entire assembly joining itself with the heavenly liturgy in praise of God.

The Sanctus should begin immediately after the priest's invitation at the conclusion of the Preface. The entire assembly join with the priest in singing the Sanctus.